6 DAYS TOUR FROM FES TO MARRAKECH VIA DESERT

Explore Fes, Marrakech and the Desert in 6- Day Tour:

Itinerary FOR; 6 DAYS TOUR FROM FES TO MARRAKECH:

After we pick you from the airport to the hotel in Fes, we will go through a walk in the town’s new part, which is known as Morocco’s artisan capital. It is important to visit the Idrissi city, which Idris I had found in the 12th century. It is known as the Moroccan craft and religious capital city. It is considered as one of the largest medinas in the Arabic world and one of the imperial cities with a historical influence and impact. The old part of Fes includes influential landmarks such as, Karauin: the world’s oldest university, madrasas, souk where there is diverse amount of spices, mosques, museums, plazas, different traditional Andalusian potteries, and palaces. After that, we stay at the hotel where we have dinner and overnight.

In the morning, we are ready to have a healthy breakfast to start our second day of the trip. First, we will stop at Ifrane, ”the Switzerland of Morocco”, contemplating the heavenly beauty of nature. After that, we are going to visit Cedar forests where we see the exotic apes in forests’ habitats. Next, we continue to explore the gorgeous High Atlas Mountains. They are spectacular as a breathtaking image of heaven. Then, the largest palm tree can be seen, which means we are entering Errachidia. Here, there is an ideal microclimate oasis of trees, fruits, vegetables, which makes it a rich area. Later on, we arrive in the economic capital of the Tafilalet region, Erfoud where the sea covers the fossils. However, the Saharan borders are visible, welcoming us to Merzouga where the asphalt disappears. In the end, we spend overnight with dinner at the hotel.

Today, we are going to explore Erg Chebbi. We will visit some more villages around Khamlia that are existed far away from the hustle of cities. After that, we will meet Nomads, being introduced to their traditions and way of living. In the evening, you will like to take 4×4 riding then spending the night under the glittering sky in the desert. However, overnight in the desert tents of nomads is interesting

We are going to continue our Sahara tour with its’ fourth day. After breakfast, we will depart to Rissani and the ancient caravans’ center of old Sijilmassa. Afterwards, a beautiful landscape of semi- desert is visible along the way before reaching Tinghir. It is one of Morocco’s most interesting places. After that, the impressive Todra gorge is there with over 300m. However, we can take the road to Ouarzazate through what is called the road of a thousand Kasbahs. Meanwhile, reaching Ouarzazate is easy after that; it is the cinematic capital of southern Morocco where international films were shot there. It is amazing to explore the locations of worldwide movies as Troy, Gladiator, Mummy and many others. Next, we will visit Taourirt Kasbah where we will enjoy the atmosphere. At night, dinner is served with a special overnight, which is full of joy and chanting.

Towards Ait Ben Haddou, we will start the fifth day of the trip. You will enjoy unforgettable time in the UNESCO World Heritage, Ait Ben Haddou or the queen of Kasbahs, in other words. Later, a various collection of locations is on the list of exploring as Telouet Kasbah, Glagui’s ancient palace and others. Then, we arrive in Tizi N Tichka passing through Morocco’s highest mountain port – (2,260 m) in order to reach Marrakech, the imperial city of Morocco. Finally, we spend the night at the hotel.

Visiting beautiful Marrakech is after breakfast. In fact, Marrakech is called ” the red city”. In addition to the fact that houses and walls of Marrakech were red long time ago, the name of the city refers to the richness of the land where palm trees, dates and different large supplies of provisions are born there. This is the reason why an ancient tribe on the Atlas’ side decided to live there. It is the region where Almoravids and the nomads of Sahara had lived; it was specifically in the 11th century. Menara, the Koutoubia, the Casbah, the Bahia Palace and the Saadian Tombs are important places to visit with influential concept. Do not miss the chance of being a part in Majorelle Gardens and souks’ visit. However, you will discover” Djemaa El Fna” square where everything is about activity and love of life. You will enjoy the time with dancers in the middle of the square next to artisans, snake charmers and merchants. Our trip comes to end when we take you to the airport where your flight departure is. Hope you enjoy the six- day trip from Fes to Marrakech via Merzouga. 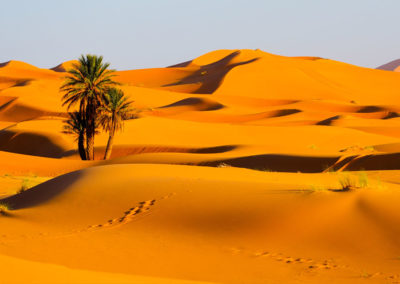 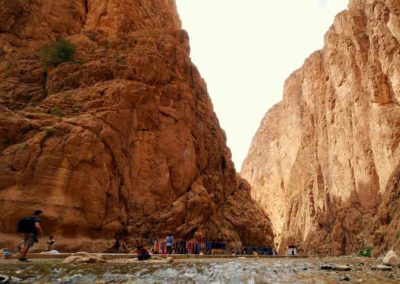 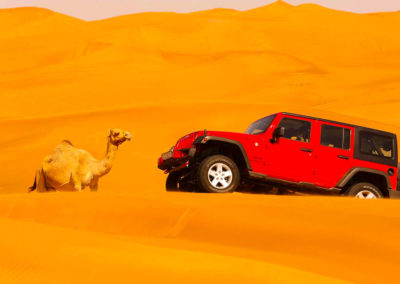 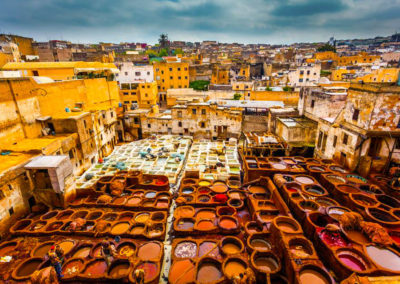 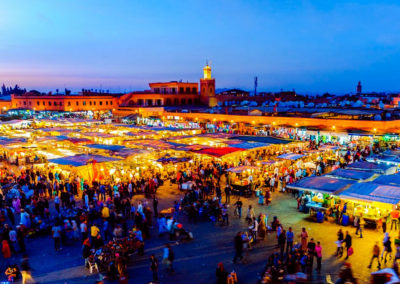 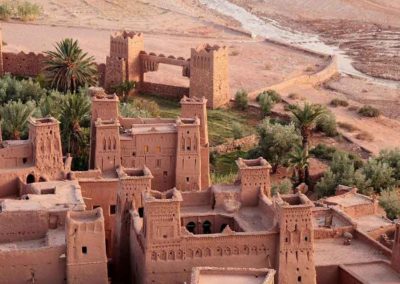 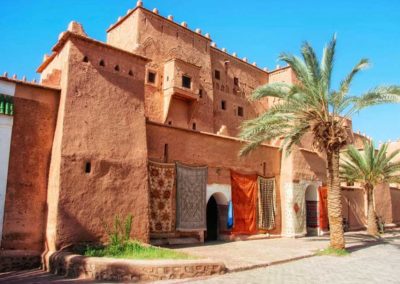 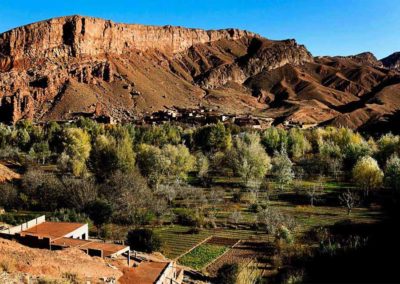